Did you know that a Tynron man, Captain Samuel Thomas Dickson Wallace (pictured), won a VC in the First World War?

Captain Wallace was actually born in Thornhill, where his father’s sisters lived, and spent the first 9 or 10 years of his life in Wallaceton, but then his family moved to the Ford,Tynron. His grandfather was Samuel Wallace of Auchenbrack, Tynron; his brother Quentin farmed at Shinnelhead, Tynron; and his parents are buried in Tynron. Among his uncles were Professor Wallace of Edinburgh University; Williamson Wallace of Lincluden, Irongray; and J.R.W. Wallace of Auchenbainzie.

In 1914 Samuel joined the Royal Field Artillery. As part of the Battle of Cambrai, lasting from 20-30 November 1917, he won his VC. His citation (London Gazette, 12 Feb 1918) states: “When the personnel of his battery was reduced to five men, had lost its commander and five of the sergeants, and was surrounded by enemy infantry, he maintained the fire of the guns by swinging the trails round close together so that his few men could continue loading and firing, thereby covering other battery positions and materially assisting some small infantry detachments to maintain a position against great odds. He was in action for 8 hours, firing the whole time and inflicting serious casualties on the enemy. Then, owing to the exhausted state of his personnel, he withdrew when infantry support arrived, taking with him the essential gun parts and all wounded men.”

This achievement will be celebrated in an event to be held on 20 November in Tynron at the War Memorial, starting at 9:45am in Tynron. It will involve a military parade, the placing of wreaths, and the unveiling of a plaque near the War Memorial by members of the Wallace family. The plaque will have electronic connection to a website detailing information about Captain Wallace. Pupils from Penpont Primary School will sing a song. The Last Post and Reveille will be sounded. After refreshments in the Hall, the scene will move to Thornhill, where a paving slab will be unveiled, at approximately 11:30am. This will also have electronic connection to the website. Similar ceremonies will be enacted, and then the procession will be driven to Moffat for the final unveiling of a plaque (at approximately 2pm) and a civic reception. 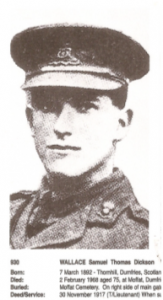